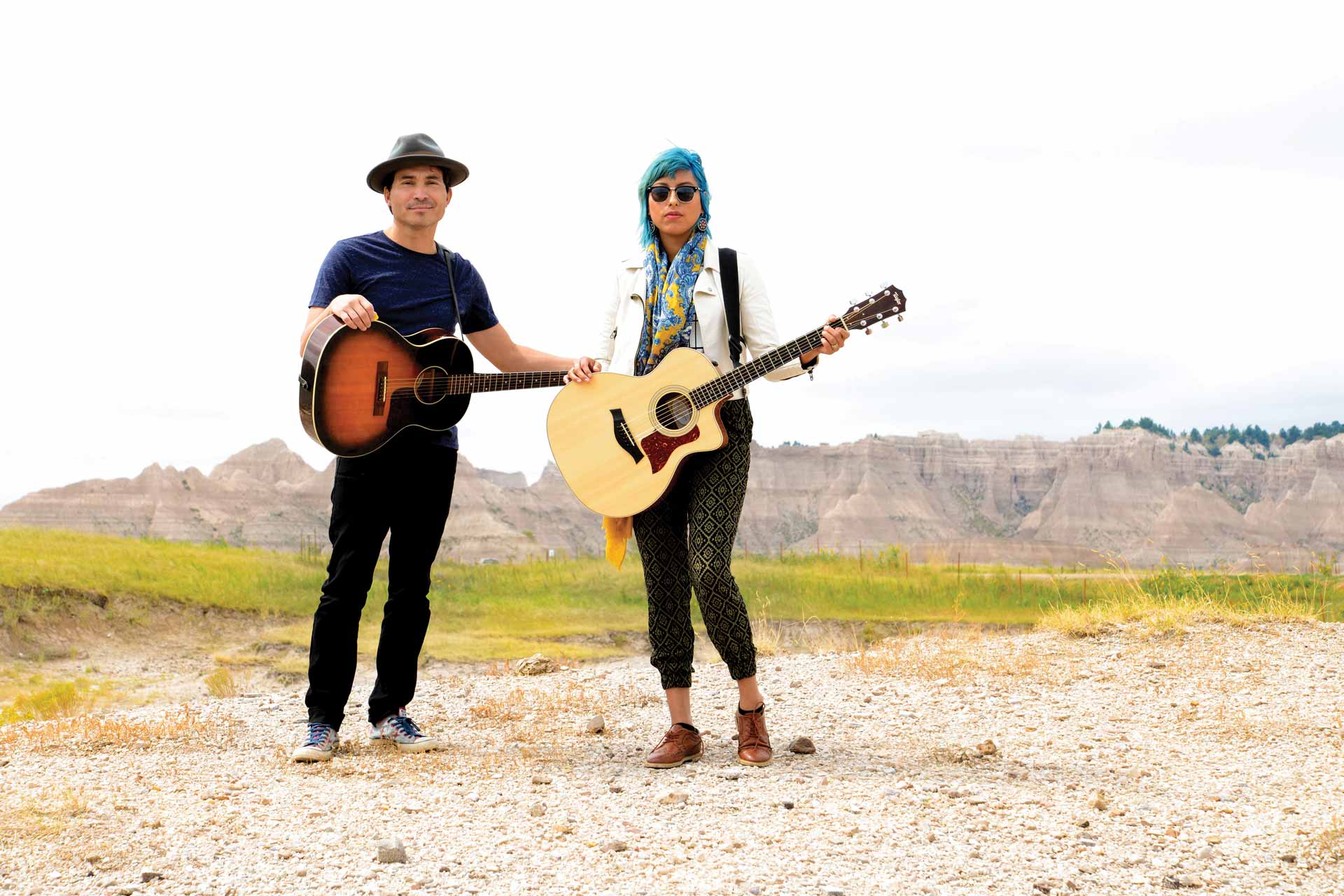 First Peoples Fund focuses on enhancing the crucial role Native artists can play in supporting economic growth, as well as sustaining the culture, traditions and well-being of Native peoples. Through this important work, and its focus on arts as an entrepreneurial driver of good jobs and financial capability, First Peoples Fund furthers the impact of the Foundation’s strategic framework, touches on all four portfolios of its funding strategy—financial inclusion, enterprise development, work opportunity, access to capital—and demonstrates the interlocking connections between them. 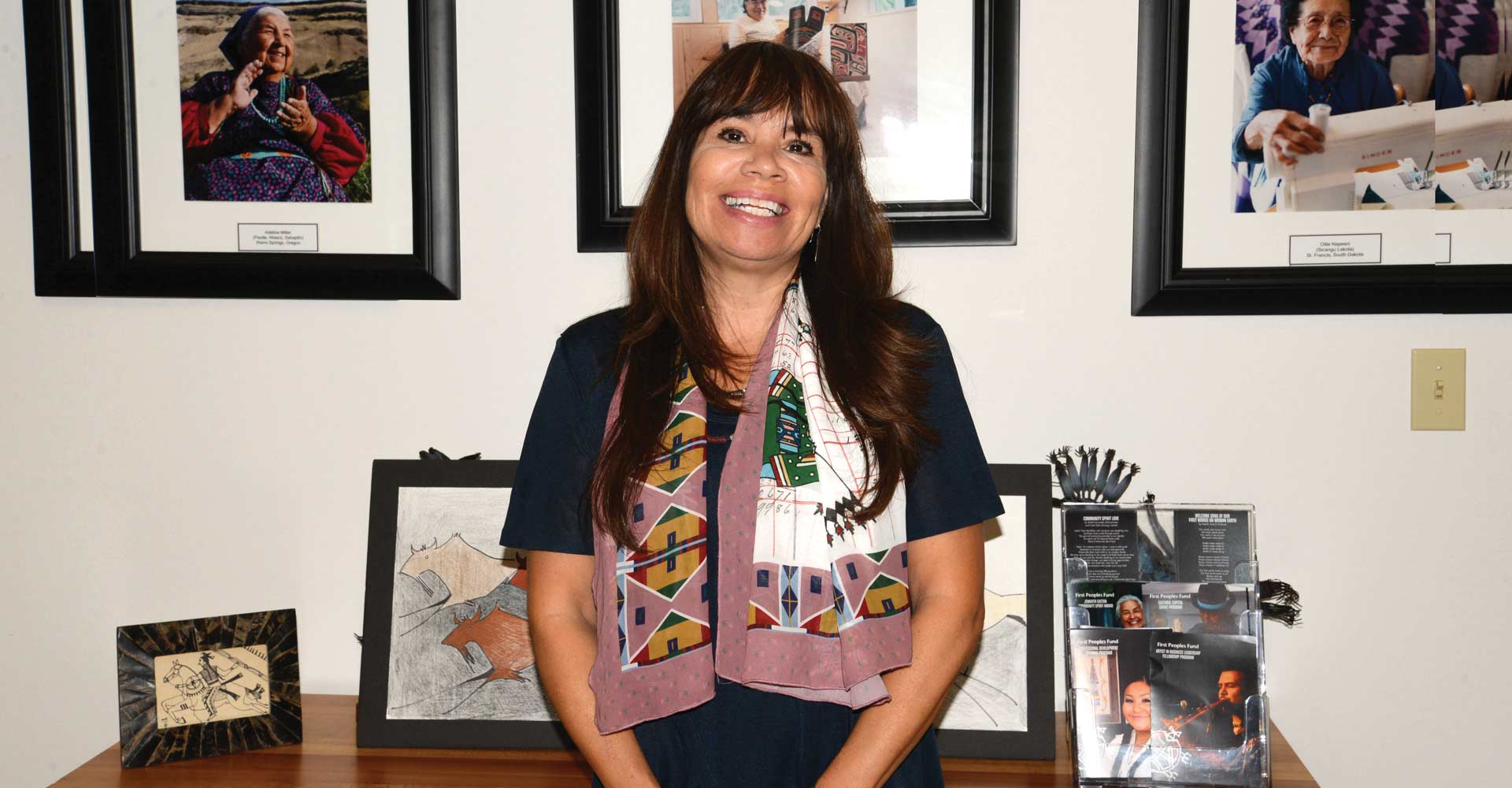 Lori Pourier is the president of the First Peoples Fund, but before she was with First Peoples Fund—long before—she was already thinking about innovative ways to strengthen Native communities through culture and arts.

“Growing up on the Pine Ridge Reservation,” she says, “I felt like I had my feet in two worlds. I was connected to the world of education, through my parents. I was also surrounded by traditional Lakota culture and values. I saw both of those things as a source of strength and of spiritual wealth.”

She also realized, she says, that the communities she grew up in, and the culture and traditions that defined them, were misunderstood, underserved, and often overlooked.

“We’re proud of our Artist in Business Leadership program. We’ve started equipping an army of artists in Indian Country with training in banking systems and finance, and now they’re working alongside the business coaches, and passing on their knowledge.”

“Only a tiny percentage of philanthropy in this country goes to indigenous peoples. And only a fraction of that percentage goes to rural areas. That’s not right. I wanted to try and do something to help change that equation.”

During Lori’s time at First Peoples Fund, that equation has indeed begun to change. The support provided by First Peoples Fund to Native artists across the country has had far reaching impacts—not just on the individual artists, but on their communities and beyond, as well.

“We’ve really had to educate ourselves about all of the systems that support the work that we do,” she says. “And that work is founded on supporting individual artists and entrepreneurs, and helping them to make a living from their art in their own respective communities.” 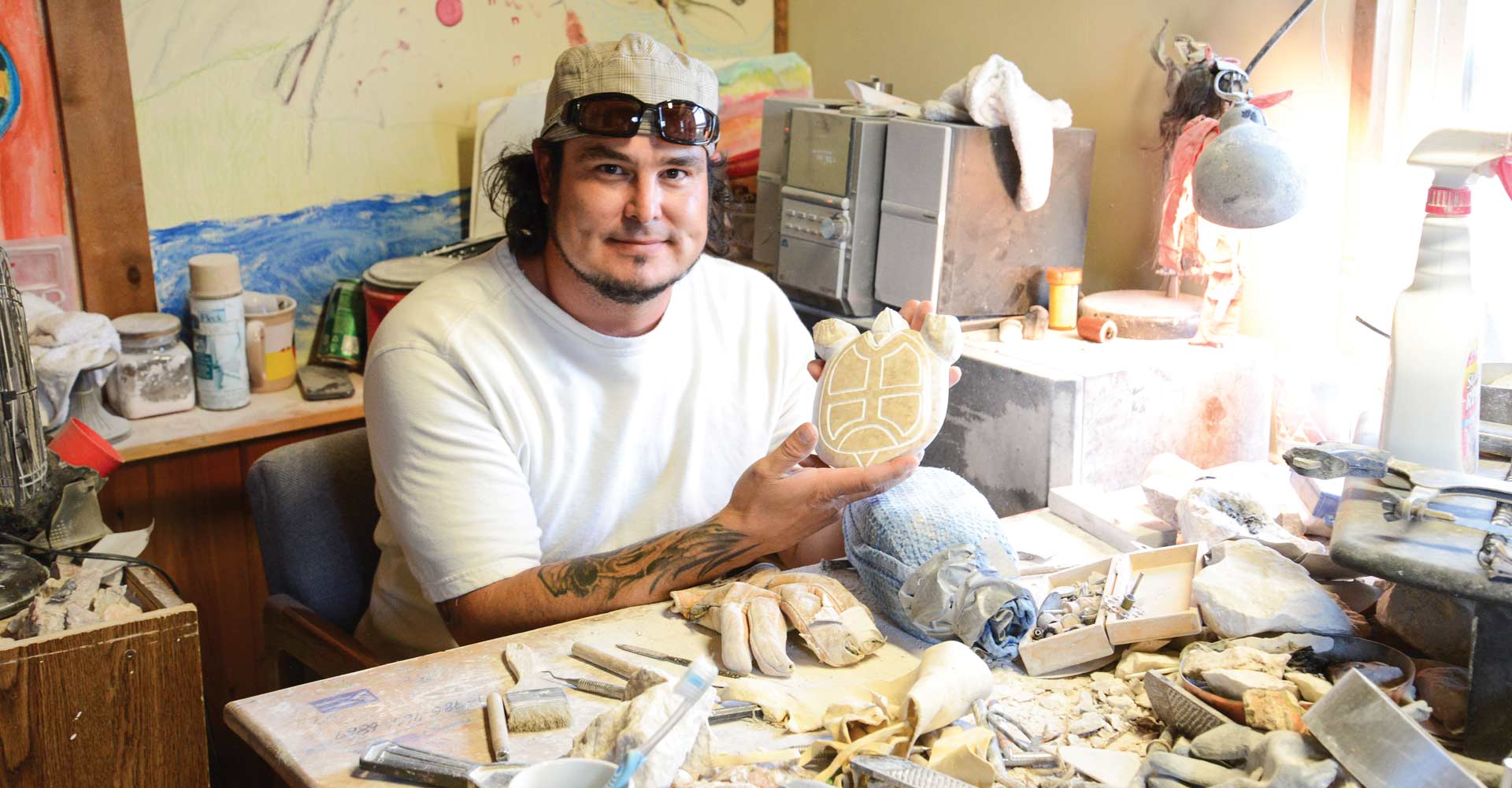 That support comes in the form of a variety of small grants and fellowship programs made to Native artists, including the Artist in Business Leadership grants, the Community Spirit Awards, and the Cultural Capital grants (for more information on these, see First Peoples Fund’s Fellowships).

“At First Peoples Fund,” Lori says, “we try of course to find ways to measure the effectiveness of what we do. But our role, and the impact I believe we are having in Indian Country, goes far, far beyond what can be quantified.”

“Those folks (First Peoples Fund) helped me think a little bit bigger. They gave me confidence to think that I could live from my art. And in that way, I could reach a lot more people.”

How to quantify, for example, the role played by Cultural Capital grantees Scotti Clifford and Julianna Brown Eyes and their family—who form the widely acclaimed alternative rock band Scatter Their Own? Standing on a bluff on the Pine Ridge Reservation, overlooking the rugged badlands near their home in the community of Rocky Ford, Scotti talked about the work of First Peoples Fund and how it can effect change in places like Pine Ridge.

“Not just on this reservation,” he says, “but in any Native community, really, economic viability is huge. And the scale doesn’t really matter, because these small grants can be leveraged in so many ways and they have a ripple effect in our communities.”

Julianna puts it this way: “We Lakota have always prided ourselves on being independent and self-sufficient. And Scotti and I, as artists, try to convey those values to our children. When we take our family on the road, we like to say that we are packing up our tipi. We’re a modern day Lakota family, but we still chase buffalo, which are the gigs, and we teach our children how to hunt, by touring, and we don’t shy away from teaching them about money.” 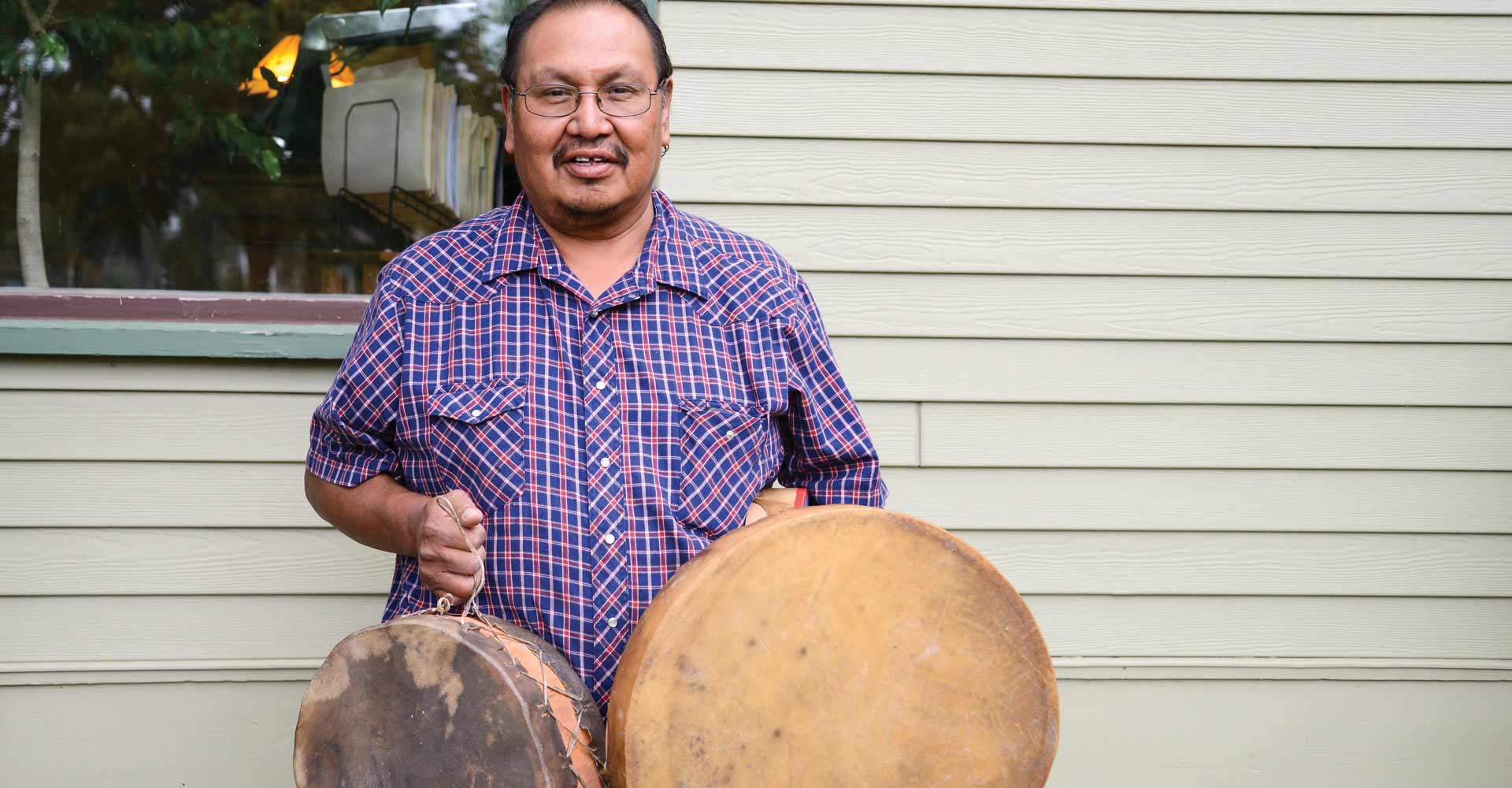 Financial support from First Peoples Fund, says Julianna, can be absolutely crucial. But even more important to indigenous artists, she says, is the recognition of their work and of their role as culture bearers. One such culture bearer recognized by First Peoples Fund is Warren “Guss” Yellow Hair, a member of the Northern Cheyenne and Lakota Sioux nations. Guss travels to schools across the Pine Ridge Reservation to pass on traditional knowledge to young people—including knowledge of the Lakota language. He is known for his traditional art—he uses a distinctive, pictographic style to decorate tipis, drums, and sweat lodge covers.

“I’ve learned a lot about the business side of what I do – about having a business plan and finding a market for what I do.”

As he speaks, he holds a drum he made of cottonwood and elk hide, depicting a group of ochre-colored buffalo running across the sun, with the Black Hills in the background.

“It’s not about me as an individual artist. It’s about teaching young Native people who they are and where they come from. That’s the only way they’ll understand where they’re going.”

“They are not just successful artists,” she says. “They are scrappy fighters, fighting to maintain old traditions and create new ones. In a way, they are healers. Everything they do resonates in their communities and beyond. And as we find ways to help tribal economies through individual artists and entrepreneurs, we are also trying to nurture a generation that is connected to the past and looking toward a future with no barriers. And that is what we are trying to support at the First Peoples Fund. For us, anything is possible.”

“First Peoples Fund can play an effective role working with Native CDFIs to help artists get access to affordable loans that can really help them. A little can go a long way in small tribal communities. Sometimes, it’s all about momentum.” 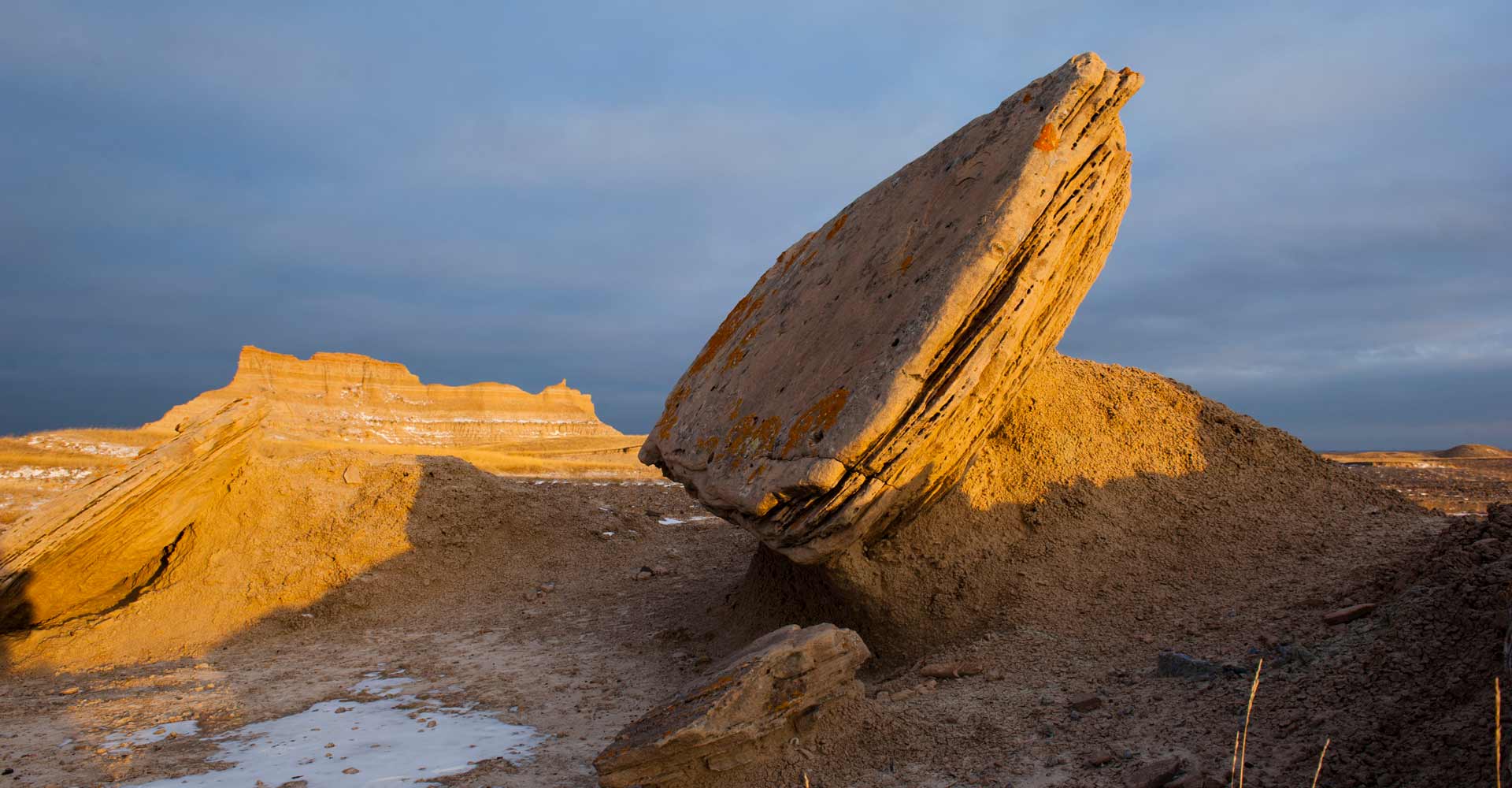 To show how our four portfolios funding strategy supports nonprofit and community work on the ground, we’ve profiled First Peoples Fund. The impact of its work touches on all four portfolios. “What’s more, we’ve also recognized how closely First Peoples Fund’s work aligns with our approach by providing ongoing support through a $1 million Presidential Grant that runs until the end of 2016,” NWAF President and CEO Kevin Walker said.

Listen to an audio story of First Peoples Fund.

Hear the music and story of Scatter Their Own.