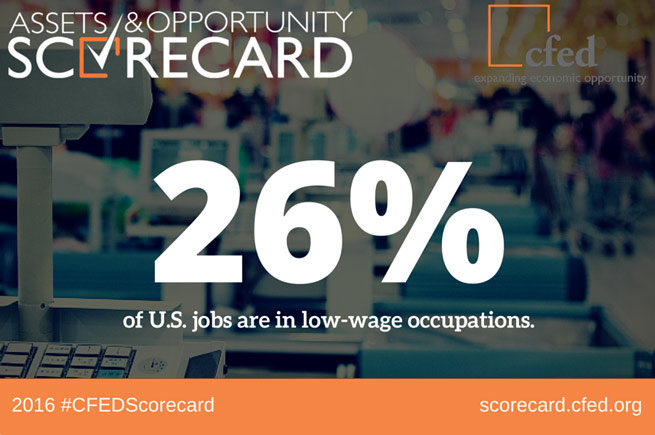 Seven years since the official end of the Great Recession, many economists agree that America’s agonizingly slow financial recovery is finally complete.

But even though the national unemployment rate has remained steady at five percent in recent months, it’s clear to many families that the widespread economic prosperity of the past is just that—a thing of the past. As President Obama remarked in his final State of the Union address, the economy has been changing in profound ways, and the impact on household finances have been similarly profound.

If you’re looking to make the case for why this is happening—whether you’re advocating for better policies or advancing other work that creates good jobs and financial capability—start by checking out the new 2016 Assets & Opportunity Scorecard, issued by our partners at the Corporation for Enterprise Development (CFED).

Findings from the Scorecard reveal:

“…there are numerous tested solutions that can be leveraged to help build an opportunity economy in which everyone has the chance to succeed.”

Financial vulnerability is the new normal. Across the US, millions of low- and moderate-income people live paycheck to paycheck with no prospect of saving for a more prosperous future. The situation is especially dire for households of color, which are more than twice as likely as white households to live below the federal poverty level and 1.7 times more likely to lack liquid savings.

However, as grim as these numbers are, there are numerous tested solutions that can be leveraged to help build an opportunity economy in which everyone has the chance to succeed.

Take the Earned Income Tax Credit (EITC)—the most effective anti-poverty program in the country. The EITC increases the incomes of hard-working families struggling to cover basic expenses and enables families to start saving for a more secure financial future—and policymakers on both sides of the aisle agree that it works. It is time to expand policies—at the federal, state and local levels—that work to increase financial security and reduce inequality.

We’re Hiring! Executive Assistant to the CEO and Board Liaison