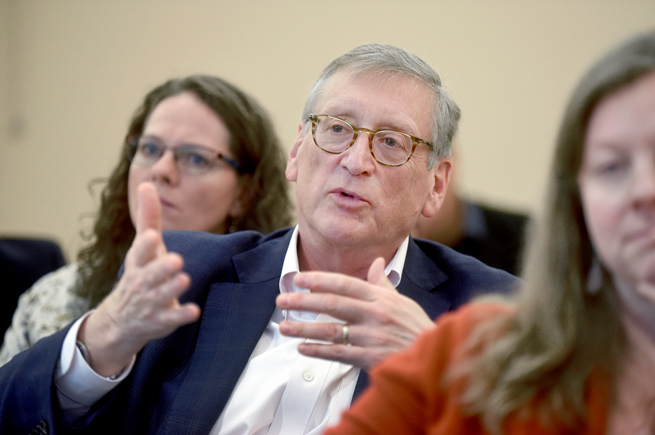 Serving a significant Native population can be a huge opportunity to strengthen local economies.

As the president and CEO of the Federal Home Loan Bank of Des Moines (FHLB Des Moines), Mike Wilson has an eye for economic impact.

The FHLB Des Moines district consists of 13 states and three US Pacific territories and encompasses approximately one-third of the country’s Native population. To Wilson, the $5 million investment FHLB Des Moines made in Native CDFIs is both a venture to grow prosperity in Indian Country and a statement of confidence to other financial institutions about the opportunities for them to make a positive difference in Indian Country through Native CDFIs, too.

But the decision to support the work of Native CDFIs didn’t come overnight; it came from several years of collaboration and careful study of the economic landscape in Indian Country.

As the assistant vice president and co-director of the Center for Indian Country Development at the Federal Reserve Bank of Minneapolis, Patrice Kunesh has led extensive research on Indian Country and has highlighted partnership opportunities between financial institutions and Native CDFIs.

Kunesh, who spoke on a panel at the FHLB Des Moines event, explained that “Indian Country is now the fastest growing population of all populations in the United States.” That spike has created a major demand for jobs, housing, and financial institutions that can help sustain the private-sector development.

A catalyst for economic growth, Native CDFIs are expanding capacity to meet growing capital demands. You can learn more about this in a 2012 Access to Capital report sponsored by First Nations Oweesta Corporation, the only Native CDFI intermediary.

FHLB Des Moines’ investment is an example of how financial institutions can help meet capital demands in partnership with Native CDFIs.

A core mission of FHLB Des Moines is to build long-term economic sustainability in under-resourced communities, like Indian Country.

We met Wilson at the FHLB Des Moines collaboration event to get his perspective on FHLB Des Moines’ decision to support development in Indian Country. We asked him what potential he sees in working with Native CDFIs. Wilson said:

“The potential is working with the Northwest Area Foundation [and Native leaders] to really further economic development on Native lands. We don’t have the expertise, but we can provide the funding and we can work with the experts to get that business done.”

Wilson also spoke to the impact and his hopes that FHLB Des Moines’ investment will offer inspiration to other financial institutions:

“What I would love to see happen is more involvement of traditional banks with Native CDFIs. I’m hoping this initiative is really going to kick off some additional participation from commercial banks and credit unions with Native CDFIs.”

With just a little effort, unfamiliarity with Native communities can be overcome.

Wilson and the FHLB Des Moines board carefully studied the Native CDFI field and were convinced that Native CDFIs are a powerful means to impact economies in Native communities.

The biggest obstacle for others? Perception, as Wilson explained:

He later underscored how important it is for businesses to see how successful partnerships can form with Native CDFIs:

“It’s important to show how those partnerships have been successful. Case studies and examples will go a long way toward breaking down barriers or perceptions that it’s difficult to do business on Native lands.”

Wilson’s success story is more common than you might think. Kunesh supported Wilson’s conclusion that these partnerships can be wildly successful. It just takes a little effort to overcome unfamiliarity with Indian Country:

“One example . . . is the Sisseton Wahpeton Oyate tribe in South Dakota, where the tribe needed homes and housing. It took a strong tribal leader looking at a really high need in his community, reaching out to a federal agency like [the USDA] Rural Development for housing, and partnering with local banks. Making the relationships work to serve the community . . . takes some time to allay the concerns, dispel the myths, and ground in truth [to] the business relationship and then construct a whole community.

“I’ve seen it happen; and when it does, it’s really amazing.”

We asked Wilson what he would tell his peers in financial institutions interested in lifting up Indian Country through Native CDFIs. Wilson told us:

“I would tell them to be patient; it’s a new business. You’re going to have to understand the ins and outs of it. Once you get through that, you’ll find it has the potential to be successful. So just be patient, learn, and pursue it!”

“Indian Country is now the fastest growing population of all populations in the United States.”