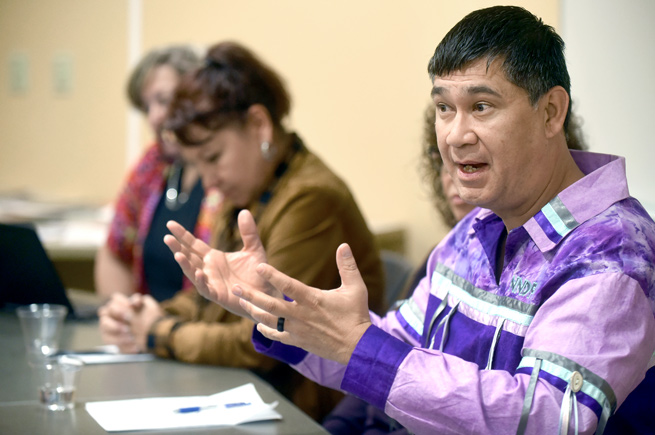 On Nov. 10, we launched a $5 million funding collaboration with the Federal Home Loan Bank of Des Moines (FHLB Des Moines) to support the groundbreaking work of Native CDFIs.

Our collaboration with FHLB Des Moines demonstrates how financial institutions, funders, and Native CDFIs can work together to unlock opportunities for Indian Country. FHLB Des Moines is a member-owned financial cooperative that supports mortgage lending, economic development, and affordable housing.

We kicked off the collaboration in Missoula, MT, by convening Native American community leaders, bank and credit union executives, and foundation professionals , several of whom highlighted opportunities for investments in Indian Country during their speeches and panel discussions.

The day showcased opportunities for financial institutions and funders to partner with Native CDFIs, which help create investments, grow jobs, and support entrepreneurship in Native communities.

Supporting the beauty and promise of Native CDFIs.

Our CEO Kevin Walker said this collaboration builds on the Foundation’s commitment to grow and deepen its partnership with Native CDFIs.

“Over years of working closely with Native CDFIs, we have come to understand that they are a powerful means by which Native communities are building long-term economic and cultural wealth,” said Walker, speaking at the event. “We hope this new collaboration will help Native CDFIs push their groundbreaking work even further and capture the imagination of new investors and new partners.”

“Native CDFIs . . . are a powerful means by which Native communities are building long-term economic and cultural wealth.”

Mike Wilson, president and chief executive officer at FHLB Des Moines, said that the collaboration with NWAF is a unique chance to support Native-led strategies that strengthen economic opportunities in Indian Country.

“We’re able to take some of our resources and work with somebody [NWAF] who really knows how to deploy this funding effectively,” Wilson said. “We think that this $5 million grant that we’re making to NWAF will go quite far in furthering economic development on Native lands.”

“We think that this $5 million grant that we’re making to NWAF will go quite far in furthering economic development on Native lands.”

Native CDFIs are scaling up growth and innovation.

“Right now, on the Blackfeet Reservation, they’re building about 40 homes,” Main said. “We would like to be the Native CDFI that funds those homeowners.”

Main also sees a significant growth in NACDC’s training program. Last year, nearly 600 people participated in 31 trainings across six reservations. The group approved over $600,000 in loan requests as a result of the trainings.

The Northwest Native Development Fund (NNDF) is also growing its lending and training programs with funding support from Wells Fargo Diverse Community Capital Program and from us. Recently, NNDF helped a Native entrepreneur open a first-of-its-kind restaurant on the Colville Reservation, giving locals an opportunity to stop by for a nutritious meal. NNDF supplied the training and financing support to get the idea off the ground. Read the full profile here. 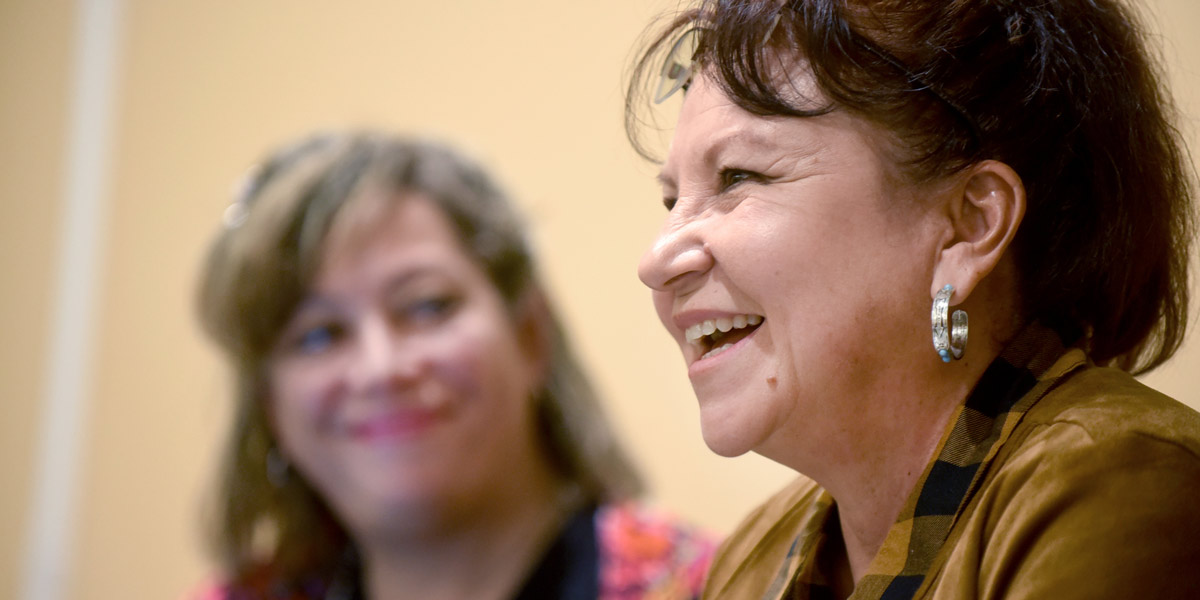 The appetite for private sector development in Indian Country is growing, and Native CDFIs need capital to meet demand.

Chrystel Cornelius is the executive director of First Nations Oweesta Corporation, the only national Native CDFI intermediary that offers financial products and development services exclusively to Native CDFIs and Native communities. Over the years, we’ve been honored to partner with Cornelius and others at Oweesta to help grow and develop the work of Native CDFIs.

Cornelius was among a panel of Native leaders who assessed research about opportunities and barriers in Indian Country. She highlighted a 2012 Oweesta-sponsored Access to Capital study of certified Native CDFIs, which showed that economies in Native communities are growing, and they have high capital demands that Native CDFIs want to meet.

“We had 77 percent of survey respondents say they received loan requests that were too large to accommodate,” Cornelius said. “[In 2012], lending capital needs were expected to double.”

A 2017 survey led by the Center for Indian Country Development at the Federal Reserve Bank of Minneapolis had a similar finding. Patrice Kunesh, the Center’s assistant vice president and director, was also a panel participant and presented preliminary results of the survey. “The additional amount to meet estimated financing needs in 2017 is $48 million,” Kunesh said. “If Native CDFIs had extra funds, they could expand services.”

Native CDFIs give banks an opportunity to respond to community needs, which helps banks meet Community Reinvestment Act (CRA) requirements. A representative from Glacier Bank in Montana said he didn’t realize that he could meet CRA requirements by investing in Native CDFIs, and that many of his colleagues would be interested in doing the same.

Financial institutions, especially those who are new to Native CDFIs, have a lot of questions about investments in Indian Country. Following are key insights from some of the questions Native CDFI leaders and bankers examined:

Investing in Indian Country through Native CDFIs is a safe bet.

Financial institutions, wanting to know how secure it is to invest in Native communities, learned:

1. Native CDFIs have default rates that are lower than the average bank because they build lasting relationships and provide financial education and training in conjunction with their lending activities.

2. Most tribal governments are supportive of Native CDFIs and they want to help them succeed.

Many financial institutions can make small but successful and impactful investments.

One bank representative during a group discussion saw it clearly: Community banks can sometimes be more flexible than bigger financial institutions, and they’re often glad to make smaller dollar investments.

We learned that financial institutions are looking to invest for impact in Native communities, want to build relationships with Native CDFIs, are eager to partner, and just need to gain a deeper understanding of Native CDFIs and the opportunities for investment.

The collaboration and the event launching it in November offered plenty of insights, observations, and wisdom from leaders about Native CDFI work and how they’re engines of opportunity for impact in Native communities. In 2018, you’ll see how we’re planning to award funding and learn more about how Native CDFIs are fantastic partners for investment and growth in Indian Country, including interviews, blog posts, and other content—let’s share the message far and wide.

CDFIs are private financial institutions dedicated to delivering responsible, affordable lending for underserved communities. Native CDFIs are rooted in the cultural and historic context of Native communities and provide services that go beyond lending. They’re engines of change, expanding economic opportunity and opening doors to loans, credit, jobs, and much more.